A Wiki based on Erin Hunter's Warriors Book Series
and surrounding internet phenomenon that anyone can edit.
96 articles since opening on 17 August 2017

Petalstar's Tale was released on 16 December 2016, and is the eleventh of many Super Editions which have been released by HarperCollins. This was written by Cherith Baldry, and features ThunderClan and one of their most prominent members, a young cat named Petalstar.

Featured seasons before the events of Into the Wild, learn more about ThunderClan's past. A young apprentice, Petalpaw, shows great promise. After receiving a prophecy, Petalpaw is forced to make a choice, and one that will shape her life for many moons to come. If Petalpaw can succeed, she can save all the Clans. However, if she fails, many cats will perish and all will be for naught.

Set long before the cats we know well graced the forest, follow the lives of a new cast of heroes... and villains. Life before the legendary Fire is cold, and only the bravest can survive the harsh conditions.

Fallen Moon was released 11 April 2017 and is the first book in the Rising Tide Arc.

Petalstar has established herself as a strong and respected leader, and the Clans are at peace. But Nightstar has found an ambition in herself and is threatening ThunderClan. It's up to young Fernpaw, the granddaughter of both Petalstar and Nightstar, to keep the peace in the forest and save her Clan from destruction.

20 November 2016 - Alibaba Pictures confirms that David Heyman, also the producer of the Harry Potter series movies, will be producing the Warriors movie. No further information is known, but an interview was taken and released online. It is also confirmed the movie with be CGI, and will probably be released in 3-dimensional format. ~~~~Theputch 02:44, November 21, 2016 (UTC)

20 October 2016 - Alibaba Pictures has bought the rights to Warriors. There is currently no more information on the subject, but we will learn more as it gets deeper into the process. ~~~~Theputch 08:31, November 01, 2016 (UTC)

03 November 2015 - The newest Super Edition, titled Moth Flight's Vision, is finally released! Make sure to get your copies wherever books are sold. ~~~~Theputch

01 September 2015 - The two latest books - the newest novella and the last edition in the DOTC series are now available! Be sure to get your copies! You can get Goosefeather's Curse on Amazon or iBooks, and Path of Stars is available wherever books are sold. ~~~~Theputch 00:36, September 2, 2015 (UTC)

21 July 2015 - The new covers for the Power of Three books are now officially released! Check your local book stores to see if they have them in stock. The new covers of Omen of the Stars will be released on November 3rd, 2015. Goosefeather's Curse is to be released on September 1st, 2015, along with Path of Stars. And the 6th series has been announced, called Vision of Shadows, with The Apprentice's Quest being the first book to be released on March 16th, 2016. ~~~~Theputch 17:05, July 21, 2015 (UTC)

Mapleshade's Vengeance and A Forest Divided to be released.

04 March 2015 - Mapleshade's Vengeance, A Forest Divided, and the new cover re-releases of the first two arcs of Warriors are due for release within the next month! Be sure to get your copies! User:Theputch/Sig2 21:46, March 4, 2015 (UTC)

Dangerous Season was released 18 August 2017 and is the second book in the Rising Tide Arc.

After stopping Nightstar's plans to take over ThunderClan territory, which includes Sunningrocks, Fernpaw has received her warrior name of Fernclaw. Now, she can comfortably partake in the life of a warrior, but a dark secret may prevent her from ever having a normal life again.

When the truth about who her and Robinflight's father is revealed, Fernclaw's life is torn apart. Feeling betrayed by their mother Willowfall, Robinflight chooses to seek refuge in the very Clan Fernclaw tried to protect him from: RiverClan. Now, it's up to Fernclaw to bring her brother home, or her family will be gone once and for all.

Leopard
A leopard is a large, spotted cat that is present in Clan mythology as members of LeopardClan. They were said to be the swiftest of the Great Clans, and they had black spots on their pelts.

One story, How LeopardClan Won the River, explains how a LeopardClan warrior named Fleetfoot says that she can kill a vicious, dangerous boar named Rage. LeopardClan's leader, Swiftstar, makes an agreement with the other Clans that if Fleetfoot can kill the boar, LeopardClan would get to use the river for hunting for a moon. Fleetfoot finds the Rage and kills not only him, but also his mate, Fury. Because she killed two boars, LeopardClan receives sole hunting rights to the river. 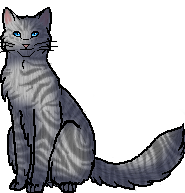 Petalstar is a sleek, slender, lithe, hard-muscled, beautiful silver tabby she-cat with soft, neat, short fur, a delicate face and head, a torn ear, a long, sleek tail, and luminous, ice-blue eyes.  She is the leader of ThunderClan.

The official Warriors site, warriorcats.com, is maintained by official forces. On the site, you will see an introduction to the authors, games and videos, news, a family tree, maps, and trivia. This site also has a German variation of it.

ReadingWarriors.com is a site devoted to helping kids read, and forums.warriorcats.com is the official message board. Harper Collins, the publisher of the books, also has their own website, harpercollins.com. Although it is dedicated to other books they published, they have browse inside of each Warriors book.

Retrieved from "https://petalstar.fandom.com/wiki/Petalstar_Wiki?oldid=152"
Community content is available under CC-BY-SA unless otherwise noted.